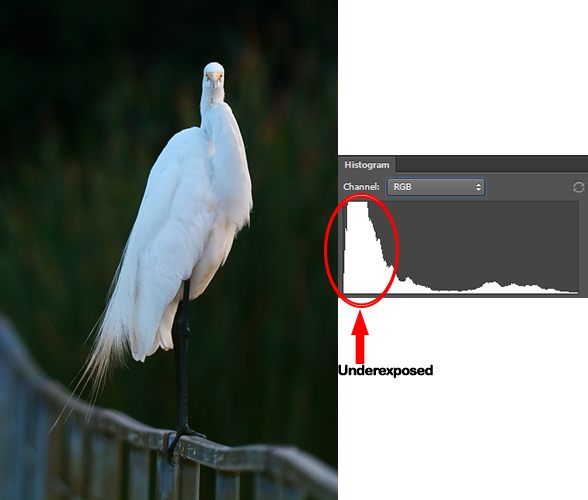 Histogram simply is a graphical representation of the distribution of light or color components in a photograph. It is the easiest way to achieve proper exposure. Just by checking the histogram, you can make out if the image is underexposed or overexposed. Understanding histograms will be very handy in the field, as you can correct any exposure mistakes immediately.

In digital world, an image is made up of collection of pixels and a pixel is made up of Red, Green, and Blue (RGB) color components. Pixel is the smallest display area of illumination in a photograph. However, in digital world, it is just an array element which is represented in 24-bits in RAW format. Pixel is generally 8-bits in JPEG format and 8-bit, 10-bit, 12-bit, 14-bit or 16-bit variations using TIFF format.

You will find two types of histograms in modern DSLRs. One which is represented in all black (which is basically the light distribution), and Three histograms representing Red, Green, and Blue color components distribution.

We understand Red, Green and Blue color components, since a pixel is made up of these…but where is the light distribution coming into picture?

Let us not get into equations and the conversions that are done internally. Let us just understand that each of the histogram is represented with a 8-bit value.

8-bits, in binary world, yields total of 256 values (2^8) ranging from 0 to 255. A histogram plots each of these 256 values (referred to as levels) in x-axis and their number of occurrences in a photograph in the y-axis of the graph. 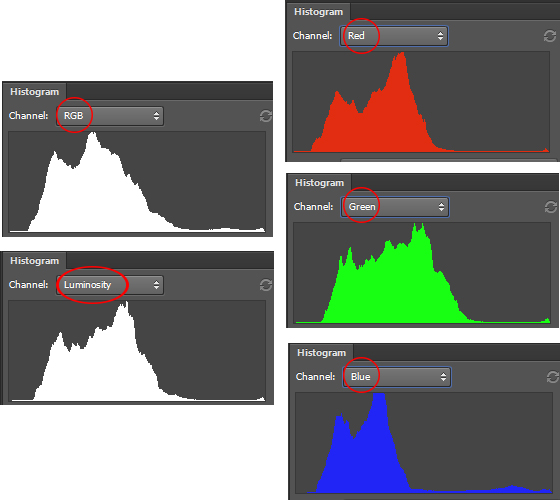 Out of 5 histograms (luminosity, RGB, Red, Green, Blue), we are generally interested in light distribution which is either Luminosity or RGB composite histograms.

That is because, the light is the most important factor to produce an image and our eye is most sensitive to the light than the color. You are already aware of this, aren’t you?

Just, turn off the light. You cannot see any colors…neither bright nor dark! On the contrary, if the light is just too bright, then you won’t see any colors again…everything will look white!

We understand that histogram is a graph with 256 values plotted against the number of occurrences of each of these values. Let us understand about these 256 values.

Reading the Exposure based on Distribution of Light

If the distribution in the histogram is towards the left hand side of the graph, then the image is mostly having black shades of grey or the image is underexposed.

Photograph of a Great Egret shows that the overall image is dark or underexposed. The histogram indicates the same in a graphical way.

On the other hand, if the distribution in the histogram is towards the right hand side of the graph, then the image is mostly having white shades of grey or the image is overexposed.

Histogram of an image of Chipmunk, shows that the image is severely overexposed. The portion of the background in this image is completely white or overexposed. You can also observe that there is some portion of image which is underexposed, which is not easy to identify in the image, but histogram shows it clearly!

With above two examples, you can infer what a properly exposed image looks like in the histogram. The histogram should have grey values well distributed in the middle.

In this image of a Belted Kingfisher, the histogram clearly shows a perfect distribution indicating nearly a perfect exposure

Is it always necessary to get a well distributed histogram for a proper exposure? No, not really. It always depends on the scene.

If the scene contains only few shades of grey, then the histogram may have only few grey shades that accumulate only towards one portion of the graph. Which is perfectly fine.

An image of a frog showing underexposed histogram. But the image demands such exposure and there is no need to push the histogram to the right in this case

Expose it to the Right

Consider the below histograms: 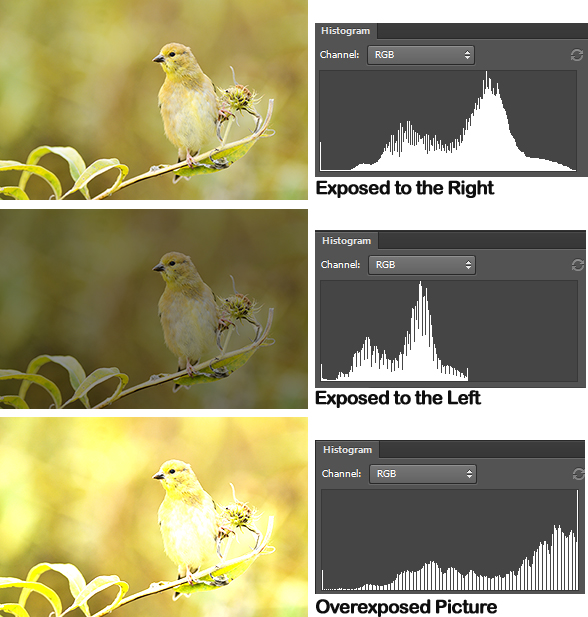 The middle image indicates that the exposure is fine, there is no hard clipping. But the image looks dark and if you try to bring the exposure up in the post, then the colors look muddy and the textures and features will be gone.
The top image make it clear that it is always good to expose to the right since we do not loose any data.
If you push it too much to the right, then you will overexpose the image

Just by looking at the Histogram, you can say that you got the right exposure. However, when you have the image exposed towards the left of the histogram or underexposed, you will most likely loose the subtle textures and features in the darker areas of the image.

However, care should be taken, not to go too far by pushing it to the right edge, since you will run into overexposed image.

How do you Avoid it?

Go for positive exposure compensation. Try with +0.3 to +3.0 and lock on the exposure when you get the histogram to the right hand side without overexposing any details.

On the contrary, if the histogram is skewed towards the right with highlights clipped, then you will run into overexposure. You can avoid it using negative exposure compensation.

What if the histogram overshoots the Full Dynamic Range?

Later you can combine them in the post by using exposure blending options to get what is widely known as an HDR (High Dynamic Range) image.

HDR is mostly misunderstood by many photographers around the world. I will cover HDR in an in-depth article sometime in the future. Don’t forget to subscribe!

As of now, remember that, HDR is just a High Dynamic Range image which allows you to capture more than 256 levels. It is a way of increasing the dynamic range from 0 to 255 to something higher. By doing this you can accommodate avoid clipping of darker regions and brighter regions.

But, at the end of the day, you have to bring the dynamic range back to 0 to 255 since the final JPEG image will be using 8-bits per pixel by blending the exposures in post-processing software. 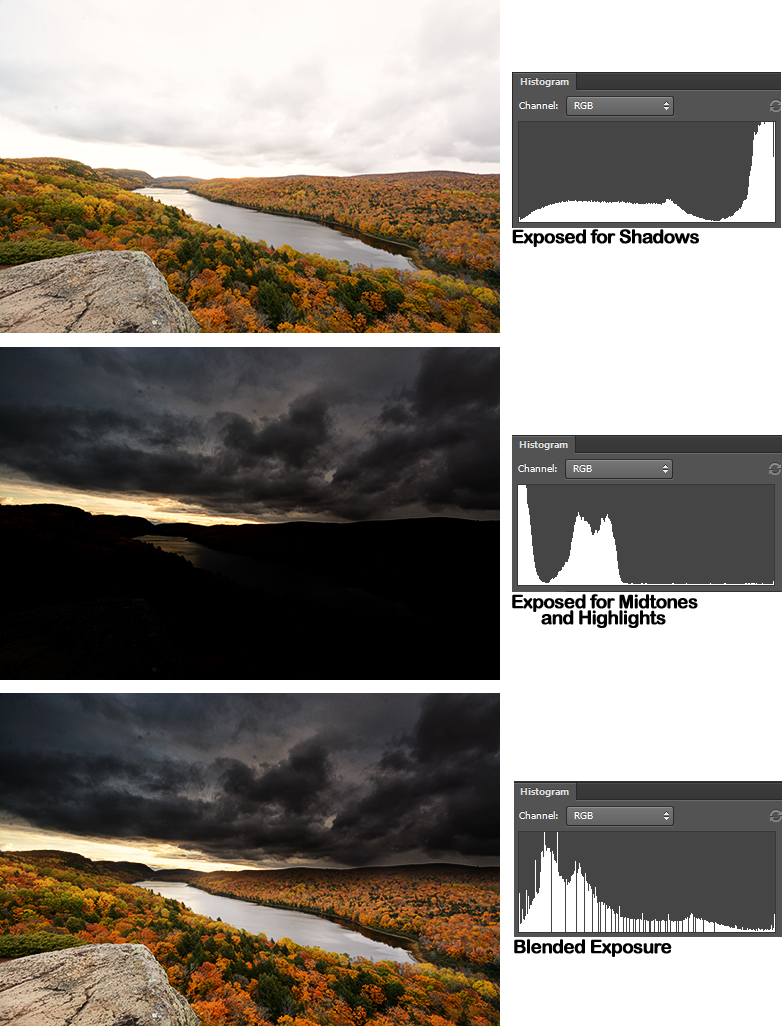 The top two images make it clear that the scene is of very high dynamic range.
The top image is exposed to the shadow region or the foreground and the middleground in this case.
The middle image is exposed for the background.
The final image is a composite of the first two images made by blending the two exposures to create a HDR (High Dynamic Range) image

Always remember to check the histogram right after you take an image to make sure you have the proper exposure. If not, then use exposure compensation and take more pictures until you get the properly distributed histogram.

Histogram makes our life so easy in the digital world, that we don’t have to assume about whether the image is properly exposed or not. Because, we know it by looking at the graph! Don’t we?

That’s all from me for now. I would like to listen to you now. Feel free to write about your take on histogram.

Let me know if you have any doubts about the concept. I will be happy to help you.

RAW vs JPEG is probably the most widely debated topic among photographers. Here are 5…

How to Create Visual Interest and Depth Using Foreground

On World Photography Day, I offered a unique opportunity for my blog readers to share…

In the Part I, we learnt about the basics of Exposure. In part II, we…