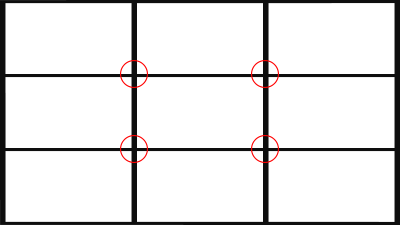 It is probably this reason, why today’s digital cameras have rule of thirds grid overlay as an option. The camera manufacturers are turning every camera user to know about the grid, though many users may not actually understand why it is there.

But the question is…is it really a rule in the first place? Let’s explore.

Do you think learning photography is complicated? Not really. [thrive_2step id=’2953′]Download Beginner’s Guide to Photography to learn simple techniques.

What is Photography Composition?

In broader aspect, any photograph you take needs to be composed! If you just point at something and shoot, it becomes a snapshot not a photograph.

A Snapshot, as the name suggests, is a spontaneous shot which does not have any intent or a thought process, is not composed and may lack artistic value. However, it does capture that spontaneous once in a life-time moment. Which is very important in many scenarios.

A Photograph on the other hand is made with an intent or thought process in mind. It calls for representing a scene in an organized and/or artistic way so that it evokes an emotion in the viewer.

The Rule of Thirds is one of the many photography composition techniques which helps the photographer to organize the elements in a photograph in a meaningful way.

What is Rule of Thirds?

Rule of thirds is a guideline to compose a photograph which is visually compelling.

If you divide a photograph with 2 equally spaced vertical and horizontal imaginary lines, you will get 4 intersection points as shown below. 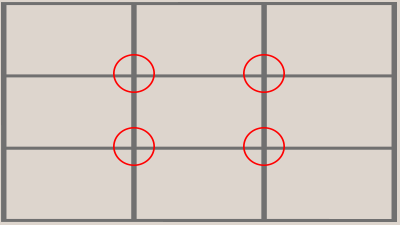 Rule of Thirds grid created with two horizontal and vertical lines with 4 intersection points (marked in red). It is the simplest of the photography composition technique

Below is the simplified version of the Rule of Thirds.

Now you understand why it is called Rule of Thirds, isn’t it?

As per the statistical data, it is said that a photograph is more compelling or visually interesting if the main subject or subject of interest, is placed on one of the 4 intersection points and/or on one of the horizontal or vertical lines.

Let us explore this concept with examples.

It is the most widely used rule in landscape photography. You might have an idea by now.

You can create compelling compositions of the landscapes by placing the horizon either on the top third line or the bottom third line of the grid as shown in below pictures.

If you have a vertical subject, like mountains, trees, etc, which is the main subject of interest in your landscape photograph, then it is often good to place them on left or right third. Keeping it dead center makes it boring or not very appealing.

The Rule of Third grid overlay showing main subject of interest, the snow-capped mountain, on the left third line or left vertical line

Check out the more detailed article on Rule of Thirds applied to Landscape Photography.

The concepts explained here for Wildlife Photography can be applied to Portrait and Macro Photography too.

You can make interesting composition of birds or animals by placing them either on the left third or the right third line of the grid. This will ensure that you have enough negative space or background to balance the photograph.

It is very important to take care of the spacing since we feel uncomfortable if there is not enough space for bird or animal to look or walk into.

Since a flying bird or a walking or running animal’s body is parallel to the ground, align it’s body to the top third line of the grid.

Since we understand that the bird or animal’s eye helps in making a connection, it is good to place the eye on or close to one of the 4 intersecting points to create interest.

It is not always possible to have the eye on the intersection point, and also it is not necessary. In most of the cases, the eye can be placed on top third or horizontal line instead.

Check out the in-depth article on Rule of Thirds applied to Bird Photography.

Is it really a Rule or a Guideline?

What do you think?

When to Use it and When to Break it?

Break it, when it does not make any sense to use it!

In almost all the above given example, you can break the rule. The question is…why do you want to break it?

It is always good to see if it works well in the first place, and break it, if it does not.

The rule of thirds is usually, but not always, broken in case of reflection photographs as it looks more balanced to keep the subject in the center. This is because, there are inevitably two primary subjects and both needs to be balanced.

The reflection photos whether it is bird or animal or landscape, usually asks for a centered composition since there are inevitably two primary subjects, Great Egret and it’s reflection in the image.

The bottom line is:

Don’t place the subject in the center of the photograph!

Learn the rule/guideline. Understand why it is called as rule in the first place.

Rules or guidelines are generally widely accepted way of doing somethings. I personally believe that:

I have been through all these phases in my photographic journey. And you?

In the upcoming article, I will cover breaking the rule of thirds to create interesting compositions. I hope you have already subscribed to the email list to get notified about it.

Reader’s Question: How to Fix the Underexposure or Overexposure in the Field? Or, How to do Exposure Compensation?

There’s was an interesting question posed by one of our readers. I thought you might…