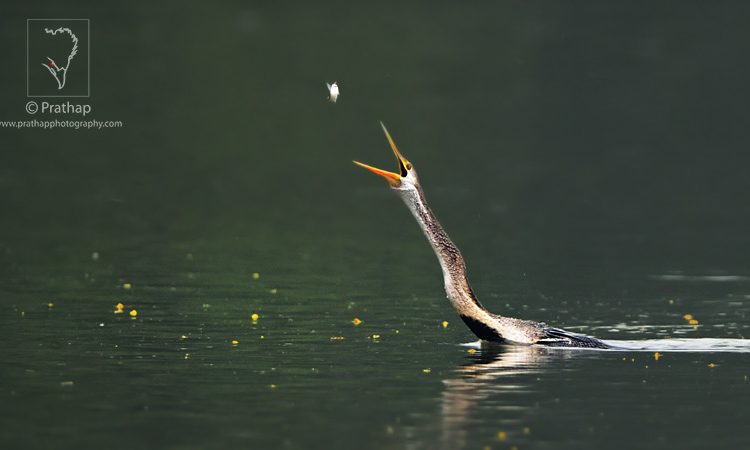 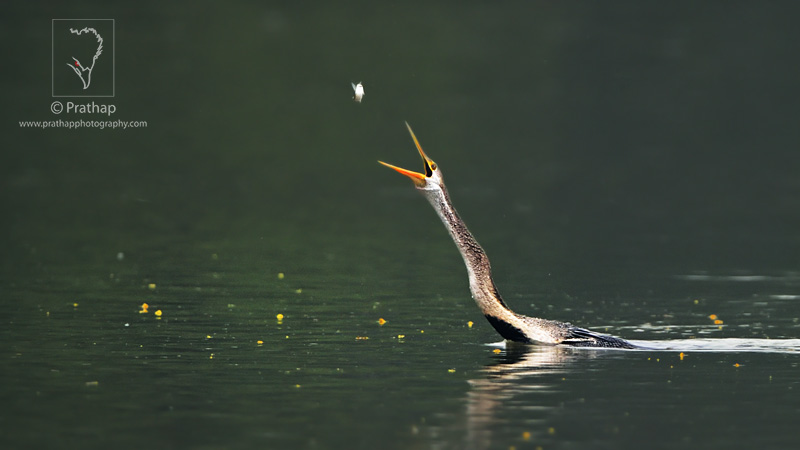 Indian darters (or snakebirds) being such big birds feeding on tiny fish was bit of an undigested factor for me. They feed on these tiny fish only for a little while before they end up drying up their feathers for several minutes to more than an hour.

The Indian darters (or snakebirds) dive at some point and go invisible for certain  time until they show up several meters away making it difficult to predict. It was not an easy task to lock the focus on these birds when they raise above the water with that tiny fish. They toss the fish before swallowing them. It was way too difficult to get the tossing shot as it would lost just a few seconds and there was not much time left for autofocus system to lock.

I was able to get only couple of action shots of these Indian darters with fish. It was only about patience and perseverance. I was able to track this snakebird down on this occasion as it rose above the water level with this fish.

With focus locked I knew that I am going to get the shot I wanted, something hilarious happened. This Indian darter tossed the fish way far from its position and then hurriedly extended its snake like neck to catch the fish. I could feel the heartbeat of the bird when the hard earned trophy was just slipping away!

Did it catch the fish then? What do you think?

No matter how technically proficient you are, you have to wait. You have to be patient when it comes to bird photography. Patience and perseverance pays off in the long run.

I keep thinking to myself, if it was very easy to photograph birds, it wouldn’t have been a popular form of photography! Isn’t it?

Read the Day #16 photo story about the Indian darter or snakebird.

The Oriental darter or Indian darter (Anhinga melanogaster) is a water bird of tropical South Asia and Southeast Asia. It has a long and slender neck with a straight, pointed bill and, like the cormorant, it hunts for fish while its body submerged is in water. It spears a fish underwater, bringing it above the surface, tossing and juggling it before swallowing the fish head first. The body remains submerged as it swims, and the slender neck alone is visible above the water, which accounts for the colloquial name of snakebird.

It Was An Eye-Opener. I Gave Some of The Best Photography Tips That Day!

Imagine what happens when your plan bombs. It’s most likely you’ll end up being frustrated,…

The Photo Mesmerizing Sunrise at Lake Superior in Upper Peninsula, Michigan. Story Behind the Photo…

10 Photography Quotes To Light Up Your Day!

It is not possible to learn everything from the books or articles; sometimes you have…