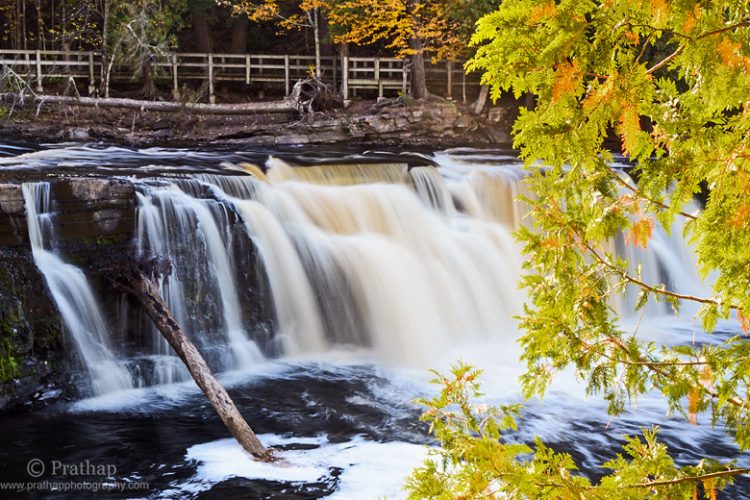 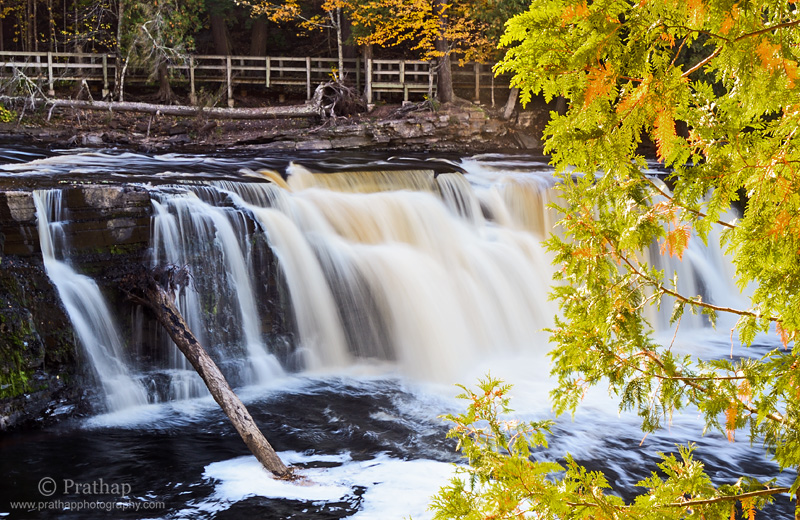 Manabezho Falls is a waterfall on the Presque Isle River and is located in the Porcupine Mountains Wilderness State Park in Gogebic County, Michigan. With a drop of approximately 25 feet and a crest of 150 feet, it is the largest of the waterfalls on the river. It is below Manido Falls and Nawadaha Falls. The name Manabezho refers to an Ojibway spirit god. A view of the falls is easily accessible by trail.

I and my wife ended up going to Upper Peninsula area in the autumn season hoping to catch the peak fall colors during our 5 day trip. Upper peninsula hosts a large number of waterfalls with some well-known falls like Bond falls, Agate falls, Presque Isle falls, Manabezho falls to name a few.

We were lucky enough to see peak colors during our stay for 2 days. The entire Porcupine Mountains Wilderness State Park turned vibrant and photographic opportunities were endless! More number of photos from this place would make it to Photo Diary to give a glimpse of that beauty.

BTW Day #3 photo of Sunrise at Lake Superior was taken during the same trip.

We were enjoying the true nature full of vibrant colors over well connected boardwalks that lead to different waterfalls. We planned to cover Presque Isle, Manabezho , and Manido falls on that day.

After Presque Isle falls we ended up on a wrong route into the forest in search of Manabezho falls. We asked two trekkers who said we were on the right track and guided us to go on a route. Though we were in doubt if that was the real route, we headed in the suggested direction. It was not late for us to realize that we were on a wrong path, because we saw people on the board walk watching the falls…but on the other side!

I was disappointed because I had to carry my tripod and the camera walking so long to find that we ended up on the other side of the falls. We had to walk all the way back on the same route to reach the actual spot.

But, there was something unique about that view of the falls. As per my research in Google, I was not aware of any photo taken from that angle (atleast 2 years ago). I thought of making some photographs and we went downhill on a slippery path. There was one spot just enough to place my tripod comfortably.

I took several different compositions of Manabezho falls at different focal lengths in Nikkor 12-24mm lens. Something was not right because the falls was way too far from that place. I had to find something in the foreground to frame the shot so that it adds depth and interest to the photograph.

There are secondary elements adding to the composition like the log in the left hand side of the frame acting as a leading line and the autumn leaves on the top of the frame adding vibrance and setting the context.

Opportunities to photograph are abundant, you just have to keep an eye. Try many different compositions of the same subject/scene. The more you look the more you will find something interesting.

Think about creating depth. If you are using secondary compositional elements keep them very subtle. The secondary elements should not overwhelm the primary subject and should be coherent part of the scene.

Read the article 7 Tips to Create Stunning Photographs of Waterfalls.

The Photo Amazing clouds during sunrise in The Wind Munnar resort, Munnar, Kerala. Story Behind…

10 Photography Quotes To Light Up Your Day!

It is not possible to learn everything from the books or articles; sometimes you have…