Manual Mode in DSLR Cameras is considered to be an out-of-this-world setting. Which understandably paralyzes many novice/amateur photographers.

I have come across many photographers who own DSLR Camera for many years but never tried.

And, what’s the most popular reason?

Because it requires them to have the technical know-how of the Exposure Triangle—Aperture, Shutter Speed and ISO–that’s either confusing or has a steep learning curve.

If this reasoning rings a bell for you, let us tackle it right here, right now.

Trust me. If you apply just the eight steps outlined in this article, you’ll see yourself playing around with Manual Mode like never before within a matter of a few minutes.

Don’t take my word for it. Just see the massive number of comments from other photographers like you who did it.

If you follow these steps exactly the way I describe, you will never have to switch back to Auto mode. That’s my promise.

Note: I have used images of Canon Rebel T3i DSLR camera settings in this article. Most of the entry-level to mid-range Canon DSLRs probably have very similar settings.

Don’t have time to read the article right now?

No problem. Download this beautifully designed pdf version of the Manual Mode for Canon DSLRs for free. 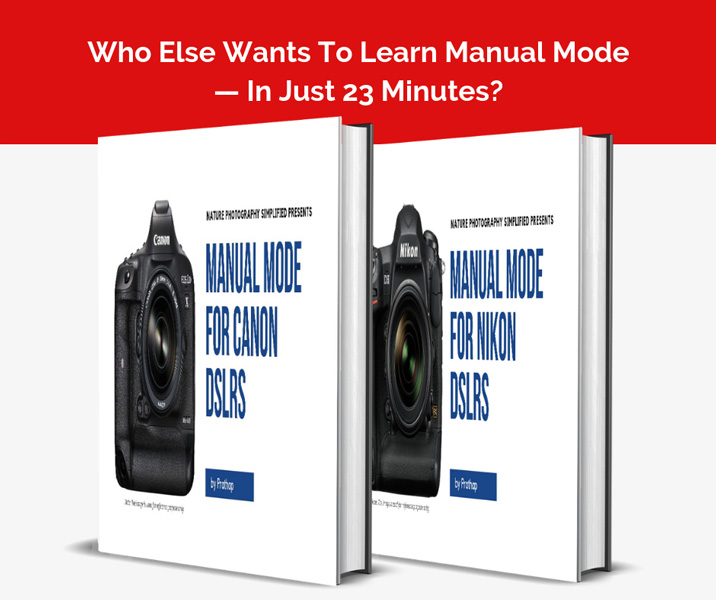 Step 1: Pick up your Camera and Start the Timer

This is the most important step.

If you are just reading it in your office, or a restaurant, or a coffee shop, then no matter what, you will never learn it. If you do not have access to your DSLR right now, then stop it here. Go back home, pick up your camera and then follow the next steps.

Start the timer on your mobile phone now. Let us see how much time you will take to understand the manual mode.

Step 2: Turn the Mode dial to point to ‘M’ which means Manual Mode 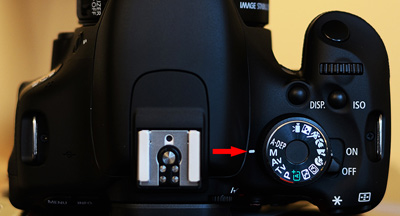 Select Manual Mode ‘M’ from the Mode Dial of your DSLR as shown in the picture. The model shown in the photo is Canon Rebel T3i DSLR

This is a very important step. Do not ignore this step.

Consider picking up a decent subject in natural light. I’d recommend you to consider an inanimate object like a soda can or flower vase or something so that it doesn’t move during your practice shoots.

Make sure to have good natural light. Try to avoid shooting in dimly lit rooms.

Keep the camera on a tripod or at least a stable surface to make sure the composition does not change.

Note that the composition shouldn’t change between the shots if you have to see the results.

So choose an inanimate object in the natural light and place your camera on a tripod.

Press the ‘DISP’ button on your DSLR to see the current settings on the camera’s LCD monitor. 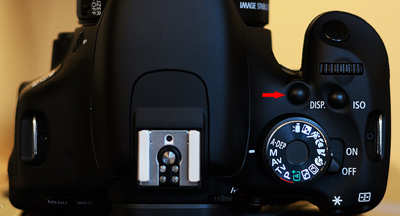 Press the display button to see all the required Camera settings on the LCD screen. Image shown is for Canon Rebel T3i DSLR.

When you press the ‘DISP’ button, you will see the settings as shown below. As of now, we are interested only in Aperture (F-number) and ISO.

Note: After a few seconds the LCD screen display turns off, press the DISP button again to get it back.

Set it to the Maximum Aperture

You need to start with a maximum Aperture which is denoted by the smaller f-number like f/2.8, f/3.5, or f/5.6 depending on your lens.

Read Prime Lens Vs Zoom Lens: What’s best for you?

To set a lens to its maximum aperture just follow this.

Press the ‘Q’ (Quick Mode) button at the back of your camera. Which should select F-number as shown below. Then use the primary dial (which usually behind the Shutter Button) on the top and turn it in the anti-clockwise direction. 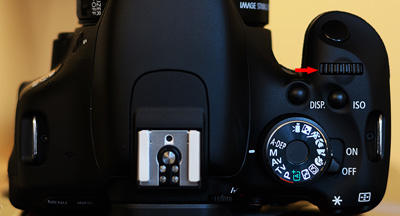 The Primary Dial (or the Main Dial) that’s used to change the Aperture, Shutter Speed, & ISO on the Canon DSLRs. Note: In the latest DSLRs there might be a Secondary Dial also that might work together with the Primary Dial.

You should see F-number decreasing as you do it. If it’s not changing it could be because of any of these reasons:

Press on Quick mode button and use the right arrow to move to Aperture setting (the F-number). Choose the minimum Aperture value for your lens.

If the lens is a zoom lens then you’ll have a maximum aperture range. For instance, your kit lens will be usually an 18-55mm f/3.5-5.6 lens.

Here’s what it means:

Set it to the Minimum ISO

If the ISO value is 100, which is the least value, then you are good to go.

Otherwise, press the ‘Q’ button and use the joystick or the arrow keys to select the ISO number as shown below.

‘ Press on ‘Q’ Quick mode button and use the right arrow to move to ISO setting. Choose the minimum ISO settings possible.

Again, turn the main dial in the anti-clockwise direction just as you did while setting Aperture until you get the ISO to show 100.

Check the camera metering indicator (refer below) which displays a dotted line with -3 and +3 on either side of the line.

Whatever it is right now, just leave it at that as of now.

Learn about Camera Metering Modes to achieve proper exposure under all conditions.

Press the shutter button. I mean it. Don’t worry, just do it.

This is an important aspect of learning. Don’t worry about making mistakes. Just make them. Make as many as you can.

Take action, make mistakes, learn from mistakes. If you learn only the right way of doing things, as time passes, you will be scared to test anything else.

Why make photography a business (assuming you aren’t in the photography business, of course :))? It’s fun. It’s creative. It’s satisfying. Just play with it.

Now let us talk about the picture you took.

You are probably not impressed with what you got. Isn’t it?

Maybe it is not what you expected. Let us analyze it then.

Here’s are the only two possibilities when your photo isn’t exposed properly:

Whatever the case, all that you need to now make sure is to get the right amount of light to hit the sensor. Right?

You might already have solved the problem in your head now. Have you? you know what to do, isn’t it? Let’s do it.

Press the ‘DISP’ button again to get back to the settings on the LCD screen.

Note: The below process works only if you made sure the scene, camera position, focus, all the settings, and the composition is intact. If you’ve made any change, even the slightest, you might want to repeat the steps from the beginning.

In Case the Photo is Underexposed

If the picture was underexposed or dark, then the marker (or the blinking indicator) would be pointing towards the -ve direction, as shown in the picture above.

In that case, turn the primary dial in the counter-clockwise direction while you watch the marker and the Shutter Speed (which reads 1/30 in the left picture and 0″3 in the right screen).

Note 1: When the shutter speed is increased from 1/30 of a second to 0.3 seconds, we are allowing the sensor to receive more light. Which in turn helps to make the image brighter.

Note: In some cameras, you might have to use the secondary dial which will be at the back of the camera. Also, there’s a possibility that you might have to turn the dial in the clockwise direction to go from -3 to 0.

As you adjust the dial, you will notice that the marker (blinking indicator) starts to move closer towards the center or ‘0’. Keep adjusting the dial until the marker hits the center where it’s marked as ‘0’, as shown in the right image above.

Just make sure to get the marker to ‘0’.

In Case the Photo is Overexposed

If the picture was overexposed or bright, then the marker (or the blinking indicator) would be pointing towards the +ve direction, as shown in the picture above.

In that case, turn the primary dial in the clockwise direction while you watch the marker and the Shutter Speed (which reads 4″ in the left picture and 0″3 in the right screen).

Note 1: When the shutter speed is decreased from 4 seconds to 0.3 seconds, we are allowing the sensor to receive less light. Which in turn helps to make the image darker.

Note: In some cameras, you might have to use the secondary dial which will be at the back of the camera. Also, there’s a possibility that you might have to turn the dial in the counter-clockwise direction to go from +3 to 0.

As you adjust the dial, you will notice that the marker (blinking indicator) starts to move closer towards the center or ‘0’. Keep adjusting the dial until the marker hits the center where it’s marked as ‘0’, as shown in the right image above.

Just make sure to get the marker to ‘0’.

Here’s what happened so far.

#1: You changed the Shutter Speed to get the Right Exposure

#2: You did Exposure Compensation

If by now, your head is turning, I recommend you to just take it easy. Try again another time. You’ll get it.

In all possibilities, you should get the arrow to point to the center (at ‘0’ marking) unless you chose not to be.

Did you get the picture of what you were longing for?!

Take some time to celebrate it. Just a “Wow! I did it” would do.

Now that you have taken control of your camera, there is no turning back from here.

Stop the timer now. How much time did you take to learn? Was it hard to learn?

If you see that your image is still not properly exposed, try another composition, another subject, and try following all the steps exactly as I have described. You’ll eventually get the perfect exposure.

Want to read the article in your free time?

No problem. Download this beautifully designed pdf version of the Manual Mode for Canon DSLRs for free.

When you followed these simple 8 steps to learning manual mode, you have essentially learned to change the Aperture, Shutter Speed, and the ISO.

Now, here’s my question to you.

Did I mention halving and doubling the f-stops or shutter speed or ISO? Nope.

Did I mention about the concept behind these three pillars of DSLR–Aperture, Shutter Speed, & ISO? I did not.

So, what’s that fuzz all about?

I say good photography always starts with getting the perfect exposure in the field. It doesn’t matter how much you are proficient in Exposure Triangle—Aperture, Shutter Speed, & ISO—it all boils down to a simple question:

“Can you get the perfect exposure in the field, every single time?”

Start by understanding the exposure compensation as a first step.

That’s all for now.

Did you enjoy this article? Do you want to know about some other concept that is haunting you for a long time? Let me know in your comments.

Before we see why Professional Photographers use Manual Mode, have you ever thought what you…

I have come across so many people in my life who make these 3 mistakes,…